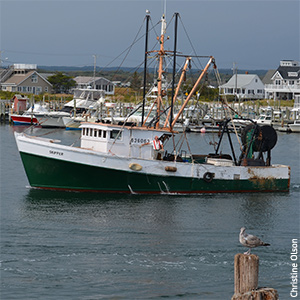 As part of the Measuring the Effects of Catch Shares (MECS) project, MECS project team members conducted limited fieldwork and interviews with direct participants in the Northeast Multispecies Sector Program and the West Coast Shorebased IFQ Program. The summary provided here includes a discussion of the overall purpose of the fieldwork task, a discussion of the methodologies employed, an identification of the locations visited, and some generalized themes heard from the various interviewees.

The fieldwork associated with this project consisted of a series of interviews with key members of the commercial fishing industry in New England and along the West Coast who were knowledgeable about how the relationships between fisheries, fishermen, and coastal communities have been affected by the implementation of catch share regimes. Specifically, questions asked during the interviews focused on the primary indicators identified on the MECS website, including how revenues and landings have changed over time, changes in fishing “portfolios” by local fleets, changes in crew employment and compensation, changes in vessel and crew safety, and changes in fishing support service and processor/market activity and employment. Other questions focused on biological and governance issues, providing context for biomass and catch trends seen in the quantitative data, as well as collecting qualitative information regarding how the programs were implemented through the council process, respectively.

The MECS project fieldwork sessions were successful and project team members were able to speak to a range of key stakeholders who were active fishermen, sector/co-op leaders, federal- and state-level fishery managers, processor and fish market management staff, support service enterprise managers and staff, and community leaders. Insights were gained into the variation and apparent inconsistencies seen in the publicly available quantitative data. Examples of these insights include deeper understanding of the relationship between targeted species, “choke” species, and traditional fishing ranges for small and large vessels; the financial and logistical challenges associated with the on-board monitoring program; outside economic pressures that affected the demand for some plentiful species; vessel consolidation; and the degree to which the approach of “fish when you want, where you want, and how you want” that was seen as having the potential to accompany the transition to catch shares has been realized (or not) by direct participants in the fisheries.

The research team believed that these data gaps hindered the analysis presented on the CatchShareIndicators.org website and additional details were needed to provide a more comprehensive, holistic description as to how people and communities were affected by the recent changes in fishery management.

Based on our understanding of the Northeast and West Coast groundfish fisheries, fishery management regimes, and involved stakeholders, we approached seven primary groups of people to participate in interviews:

Project team members identified an initial set of interviewees on each coast based on previous work in the region, knowledge of the fisheries, and input from a hired consultant. The initial interviewees were chosen through a purposive sampling processing which we consciously selected specific key informants to ensure that insights relevant to the fishery would be included in the study. This approach differs from a random sampling approach that attempts to interview enough randomly selected persons so that the study mirrors the population as a whole. Our sampling approach also included a chain-referral (i.e., “snowball”) sampling approach by which interviewees were asked to refer others knowledgeable about the relevant aspects of the multispecies groundfish fishery.

Many of the interviews were conducted in person. However, some key stakeholders could not be interviewed in the field and were interviewed by phone. The interview process was arranged along an open-ended, semi-structured interview protocol that included questions focused on how the relationships between fisheries, fishermen, and coastal communities were affected by the implementation of catch share management regimes.

If consent was granted, the interview was audio recorded digitally using either handheld or lavaliere condenser microphones. At the end of each interview, the interviewee was asked if they knew of anyone else who might provide information on how catch share management has affected the fishery and, in turn, local communities. As the answers from interviewees were open-ended, the interviews lasted as long as the respondent was willing to participate, typically 45 to 90 minutes.

In some instances, interviewees identified through the chain-referral sampling approach had very specific knowledge about a narrow subset of protocol questions. In these instances, the research team found that it was neither necessary nor productive to conduct a full open-ended interview on all research topics. For example, support service business owners typically had detailed knowledge of how their business had been affected by changes in the groundfish fishery over time, but they had limited knowledge of catch trends, the administrative and regulatory structure of the groundfish program, seafood price fluctuations, trends in overall vessel earnings, or vessel safety concerns. For these interviewees, focused questions about their role in the fishery were prioritized, as well as focused questions to triangulate information gathered through more in-depth interviews. In many cases, these interviews were shorter (10 to 15 minutes) and conducted in less formal locations than longer interviews. Many of these interviews were not recorded, although written notes of each interview were taken.

When reporting results and quoting from the interviews, we used the following Interviewee Categories to identify respondents’ affiliations while maintaining confidentiality:

Specific quotes from interviews are included in the individual economic and social indicator discussions to illustrate trends and issues seen at the individual indicator level. Looking more broadly, the following general themes arose repeatedly in our New England interviews:

Specific quotes from interviews are included in the individual economic and social indicator discussions to illustrate trends and issues seen at the individual indicator level. Looking more broadly, the following general themes arose repeatedly in our West Coast interviews: