The West Coast Shorebased Individual Fishing Quota (IFQ) Program was implemented in the West Coast groundfish trawl fishery in January 2011. This fishery operates off Washington, Oregon, and California and targets a diverse group of species, including Pacific whiting, sole, flounder, rockfish, lingcod, sablefish, and more. Whiting (also known as hake) are caught with midwater trawl nets, while the other groundfish species are harvested mainly with bottom trawls. The Shorebased IFQ Program is a Limited Access Privilege Program as defined by the Magnuson-Stevens Fishery Conservation and Management Act (MSA). Under the program, the limited entry trawl permit holders who make up the “shorebased whiting” and “non-whiting” sectors of the West Coast groundfish trawl fishery were merged into a single sector and managed with IFQs. The at-sea whiting sectors are managed by separate cooperative programs (for the mothership and catcher/processor trawl fleets). Although the Shorebased IFQ Program and cooperative programs manage two different components (shorebased whiting and non-whiting sector versus at-sea whiting) of the groundfish fishery, the programs are referred to collectively as the Pacific Groundfish Trawl Rationalization Program. The Measuring the Effects of Catch Shares project is evaluating only the Shorebased IFQ Program. 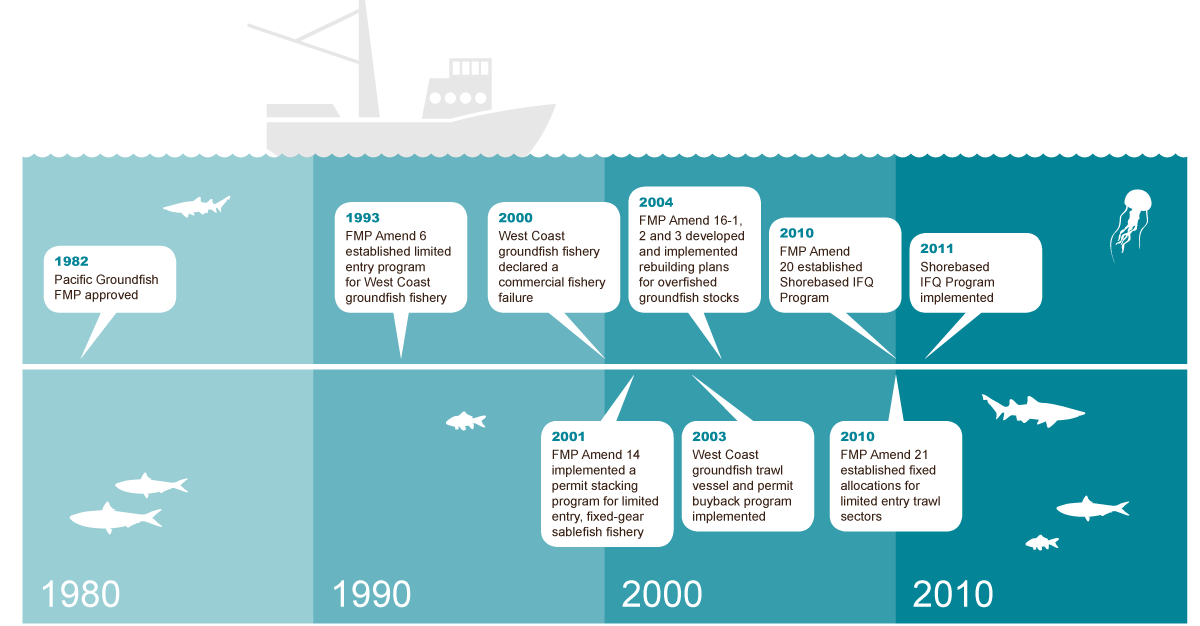 The overall goal of the Shorebased IFQ Program is to “rationalize” the groundfish trawl fishery by replacing many of the previous fishery management measures, including trip limits for most groundfish species, with alternative measures. One of the objectives of the program is to reduce catch rates for overfished species, thereby ameliorating the problem of these species constraining the harvest of healthier stocks. The program seeks to accomplish this objective by holding fishermen individually accountable for any catch of 29 IFQ species or species groups. “Top down” controls like the bimonthly cumulative trip limits were replaced by limits imposed on the vessel through the requirement to match quota pounds to catch. One hundred percent at-sea observer coverage ensures full individual vessel accountability. Furthermore, vessels that harvest IFQ species must deliver to a processor or buyer holding a first receiver site license issued by the National Marine Fisheries Service (NMFS). To verify deliveries of IFQ species, licensed processing or buying facilities must have a dockside monitor present during all such deliveries.

In addition, the Shorebased IFQ Program allows limited entry trawl permit holders to switch from trawl to fixed gears (longline and pot gear) to fish their individual quota. Fixed gears, used to catch sablefish, are more selective than trawl gear and have less potential impact to benthic habitat. This opportunity for gear switching mainly relates to sablefish, which are caught in deeper water, rather than nearshore groundfish species subject to state regulatory constraints.

IFQ Species or Species Groups in the Shorebased IFQ Program

Under the catch share program, NMFS divides the West Coast groundfish trawl fishery allocation among eligible recipients as percentages of the total allocation. This individual apportionment of catch percentage is called quota share (QS). Limited entry trawl permit owners were given an initial allocation of 90 percent of the QS for non-whiting species and 80 percent of the QS for Pacific whiting. Eligible shorebased processors received 20 percent of the Pacific whiting QS.  After the first two years of the program ten percent of the QS for non-whiting species were to be set aside for an adaptive management program intended to facilitate new entry into the West Coast groundfish trawl fishery and to address community stability, processor stability, conservation, and unintended or unforeseen consequences of the catch share program.

Individual limited entry trawl permit owners received an initial allocation of QS for various target species/species groups based on their permit’s catch history in qualifying years. In addition, NMFS allocated QS for overfished species to each permit owner based on a proxy of the amount of target species QS allocated to the owner. Eligible shorebased processors received an initial allocation of QS for Pacific whiting based on their history of being the first receiver reported on state fish tickets.

Each year, the percentage of catch represented by the QS is converted into poundage based on the total amount of catch available to the sector. This poundage is known as quota pounds (QP). The QP is annually issued to each eligible recipient according to his or her QS, but in order to be fished, the QP has to be transferred into a vessel account. A fisherman may choose to transfer the QP to his or her own vessel account, or may elect to lease the QP and transfer them to another vessel account entirely. Any vessel owner whose vessel is registered to a valid limited entry trawl permit may open a vessel account.

Transfers of QP are a means of meeting short-term mismatches between catches and holdings. Under the Shorebased IFQ Program, QP is transferable between vessels in increments of whole pounds, and beginning January 1, 2014, QS became transferable as well. All U.S. citizens will be eligible to acquire QS percentages from existing QS owners. However, the program places limits on the amount of QS that can be owned or controlled by a person, or the amount of QP that can be assigned to a vessel’s QP account. These accumulation limits are expressed as a percentage of the Shorebased IFQ Program’s allocation. Any person that qualified for an initial allocation of QS in excess of the accumulation limits was allowed to receive that allocation but must have divested themselves of the excess QS by November 30, 2015. In 2016, any QS held by a person in excess of the accumulation limits was revoked and redistributed to the remainder of the qualified fishermen in proportion to their QS holdings. No compensation was due for any revoked share.

An online system maintained by NMFS displays in real-time not only the list of QS holders but also the amounts of QS and QP each QS holder owns held and the amount of QP harvested. Transfers of QP can be completed via the online system, upon approval of the trade by buyer and seller and confirmation by NMFS that both parties are eligible and that the QP trade falls within established accumulation limits.

Beyond simply permitting QP/QS transfers, catch quota matching in the Shorebased IFQ Program is also facilitated by permitting vessels to balance their catches and QP holdings retrospectively. The program provides flexibility by allowing a fisherman who has experienced an overage a 30-day grace period to transfer QP into his or her vessel account to cover the overage. During this 30-day period, the fisherman is prohibited from fishing in the groundfish trawl fishery and from selling or transferring his or her limited entry trawl permit until sufficient QP is transferred to the vessel account.

Furthermore, the Shorebased IFQ Program includes a carryover allowance that allows a portion of surplus QP in a vessel account to be carried over from one year to the next, or allows a portion of a deficit in a vessel account for one year to be carried over and covered with QP from a subsequent year. A vessel with a QP deficit in the current year would be able to cover that deficit with QP from the following year without incurring a violation if the amount of QP it needs from the following year is within the carryover allowance and the QP are acquired within the specified time limits. The carryover amount for a deficit is based on the amount of QP in the vessel account at the end of the 30-day period during which a vessel would be required to cover its overage. The carryover allowance is limited to up to 10 percent carryover for each species. By allowing a transfer of yield surpluses or deficits of species from one year to the next, the carryover provision spreads the risk of exceeding a constraining species limit over a longer period. If an annual constraining species limit is exceeded, a vessel could adopt more precautionary and selective fishing practices in the following year.

The MSA requires fishermen to pay fees that cover the costs of management, data collection and analysis, and enforcement activities related to the Shorebased IFQ Program. The cost recovery fee amount due is calculated by multiplying ex-vessel value by a fee percentage calculated annually by NMFS. The 2014 cost recovery fee percentage for the Shorebased IFQ Program was set at 3 percent, which is the maximum percentage allowable under the MSA. All groundfish species from IFQ landings are subject to the cost recovery fee. This includes groundfish that are not IFQ species, but does not include Pacific halibut. It includes groundfish from IFQ landings regardless of the gear type used. In other words, an IFQ landing from a vessel fishing with non-trawl gear is also subject to the cost recovery fee. Harvesters are responsible for paying the cost recovery fee, and all parties making the first ex-vessel purchase of groundfish (i.e., the fish buyers) are responsible for collecting, accounting for, and forwarding the fee to NMFS. In order to reduce the burden on industry NMFS structured cost recovery for the Shorebased IFQ Program to coordinate with the Pacific Coast groundfish buyback program (History of Fishery). The cost recovery program utilizes elements of the buyback program as much as possible, including payment of fees at the same time that buyback fees are paid, making the fish buyer responsible for payment of the fees to NMFS, and use of the same online portal for payment.