Did economic and social effects on local communities change?

Short Answer: Fishing support service employment may have decreased, according to a literature review and interviews. Quantitative data are not available.

In Their Own Words

Although some of the quantitative data analyzed for this indicator exhibited clear trends, it was challenging to discuss the relationships between observed data trends and implementation of the respective catch share programs. The Measuring the Effects of Catch Shares project team believed that those stakeholders most involved in the fishery, either as active participants or as representatives of an involved coalition of participants (e.g., sector managers in the Northeast), would be able to provide insight and help to explain trends seen in the existing quantitative data. The following quotes were selected to illustrate some of those perspectives and highlight trends such as effects on small vessels, the effect of avoiding “choke stocks,” fleet diversification, and product quality. The individual quotes do not represent findings or conclusions for this indicator, nor do they represent a consensus across any category of participants.

“Just like my fish plant used to have, I would say 15 to 20 filleters. They’re down to five now because there’s lack of fish coming in. And the same thing with [support businesses]. Everybody that I deal with has seen a horrible cut. [A specific company] is where I bought all my wire and everything for my boat, all that kind of stuff. And they said they’re doing one-fifth of what they used to do. I just bought $10,000 worth of wire from them a couple of days ago. That was a couple of thousand fathoms of wire. And that’s the first order they’d had in about a year. They used to wire up boats, a couple a month when everyone was active and going. When you lose boats, the accounts are going away. We have seen little businesses go away in Charleston, I’m sure as a direct result of no money in the fishing industry.”

“If the boats leave, the grocery store isn’t selling stuff, and the guy at the gear store isn’t selling stuff. Like when it first happened, at [a specific business], they were like wow, we’re used to having guys coming in buying $10,000 worth of wire, $20,000 worth of this gear, that gear. Well, they changed. They went to doing more sports equipment. They’re doing fine. But like he says, man, we’re doing ten times the work as when we had one guy come in and buying $10,000 worth of stuff. They still sell stuff, but they’re not selling the volume because there just isn’t the boats.”

“With all the rationalized programs in place, it has made shipyards so much in demand that you have a hard even getting in. Everybody says all the boats are going to go away, we’re going to consolidate, we’re all going to be out of business, but that hasn’t happened. All the shipyards are so booked up. The net shops are the same way. They’re not going under. They’re all healthy. And so I think these IFQ programs has definitely shored up and helped the support service in a big way.” 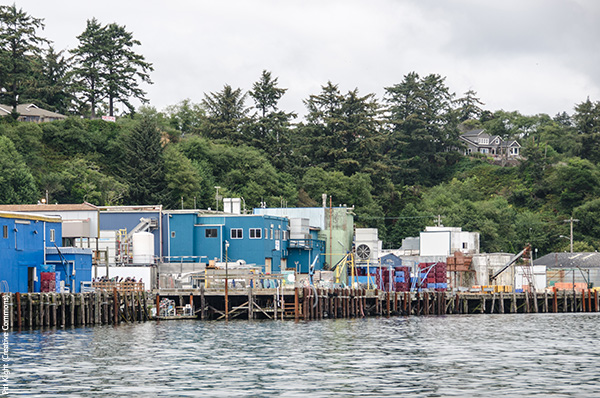 Beyond direct harvesting and processing engagement in a range of fisheries, some fishing communities derive benefits from a range of support service businesses that cater in whole or in part to the commercial fishing industry. Importantly, these businesses add to a “local multiplier” where money earned in direct fishing activities gets spent in the community, supporting additional employment and income opportunities, along with a variety of indirect economic benefits. Common types of specialized vessel support services may include marine hardware, gear, and tackle supply services; marine hydraulics, welding, electronics, mechanical, and electrical services, among others; other types of waterfront services patronized by commercial vessels often include marine fuel sales, ice suppliers, and boatyard services; and some types of businesses with more generalized clientele, such as grocery stores, may derive a substantial portion of revenues from vessel support activities. Similarly, shore-based processing entities also generate demand for support services.

The existence, composition, and vitality of a fishing support services sector is an important indicator to track at the community level as it provides an additional measure of the community’s dependence on the commercial fishing industry and helps to illustrate the nature, breadth, and depth of that dependence.

A review of the literature and information gathered during the limited fieldwork phase of this project would suggest that adverse impacts to support services may have occurred across multiple communities as a result of fishery changes that occurred with a shift to a catch share system (e.g., vessel consolidation). Unfortunately for the purposes of this analysis, however, no systematically collected data are available on these types of businesses that would illuminate their absolute or relative dependency on federally managed commercial fisheries, much less in a form disaggregated to the degree that would be necessary for attribution of business changes to the impacts of specific management programs in individual fisheries. Initially, analysis was attempted using North American Industry Classification System (NAICS) codes, but this information was not fine-grained enough to differentiate, for example, businesses that supply marine commercial fishing vessel services from those that supply services focused on fresh water sport fisheries.

Additionally, interviews conducted during the field effort for this project would suggest that a continuing trend of change in fishing support services in both the Northeast and on the West Coast, with fewer service entities becoming more concentrated in fewer and larger ports over time, pre-dates the implementation of catch share programs. Interviews would also suggest that the catch share programs may have accelerated those trends (e.g., with decreasing numbers of active catcher vessels), but available data do not allow for definitive analysis or causal attribution. This remains an important data gap in understanding the full impact of fishery management programs on communities.