Overview of the ACL-Setting Process

In 2006, amendments to the Magnuson-Stevens Act (MSA) included additional requirements to prevent and end overfishing and rebuild overfished stocks. The added measures require regional fishery management councils to amend their fishery management plans to include a mechanism for specifying annual catch limits (ACLs) for all stocks or stock complexes at a level such that overfishing does not occur and to implement measures to ensure accountability for adhering to these limits. The MSA further directed that, unless otherwise provided for under an international agreement to which the U.S. participates, this mechanism had to be established by 2010 for stocks subject to overfishing, and by 2011 for all other stocks. ACLs are required for all federally managed stocks, whether the fishery management plan includes a catch share program or not. 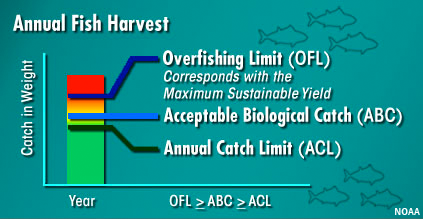 According to the National Standard Guidelines of the National Marine Fisheries Service, a regional fishery management council’s ACL for a stock may not exceed the acceptable biological catch (ABC) recommendation of the council’s Scientific and Statistical Committee (SSC) for that stock. The ABC is a single value selected from a range of possible values based on consideration of the stock’s life history and reproductive potential, vulnerability to overfishing, and uncertainty associated with factors such as stock assessment results, time lags in updating assessments, retrospective revision of assessment results, and projections. The National Standard Guidelines allow a council to divide an ACL for a stock into sub-ACLs. Examples of sub-ACLs are the West Coast’s sector-specific ACLs, which determine the quota pounds (QP) allocated to vessels in the West Coast Shorebased IFQ Program.

The charts provided (see below) show the ACLs for allocated stocks in the Shorebased IFQ Program from 2011 through 2017. In general, there has not been large variability in ACLs over the seven-year period, and for some stocks ACLs increased considerably in recent years. As discussed by Brinson and Thunberg (2013), catch share programs do not directly affect decisions about ACLs, but indirectly affect those determinations because catch share programs are typically implemented coincident with enhanced catch accounting and monitoring requirements, which can reduce management uncertainty and scientific uncertainty. Provisions of the Shorebased IFQ Program, including the accountability measures listed above, together with increased levels of at-sea observer coverage, are expected to contribute to a reduction in uncertainty.